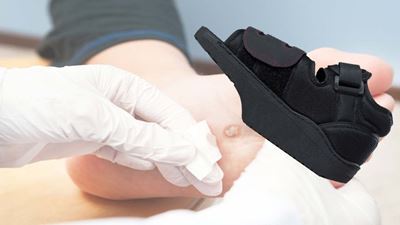 Ulcers are the open wounds which appear on the skin on inside the body in the hollow organs which are painful and burn a lot and appear mainly because of reduced blood supply to the part of the skin or the organ. They appear as open craters in the skin, are mostly round in shape – with an exception of highly advanced ulcers which have irregular shape – and have skin corroded in layers. The center most part is many a times the maximum corroded with the destruction of the epidermis, the dermis, the fat layer; the outer part curves towards the normal skin where the destruction is of the upper layer of the skin – the epidermis – with increasing involvement of the dermis and fat layer. The skin around the ulcer is red, tender to touch, painful and swollen. Sometimes patient can feel pain around the ulcer and fluid oozes out from the wound and rarely a patient may have fever if bacterial infection forms around the infected area where pus formation takes place. Sometimes ulcers can also bleed and bleeding depends on how has the infection spread around the area. Wearing diabetic shoes for foot ulcer helps in relieving the pain.

Ulcers are classified according to the time which they require to heal. The healing process for ulcer is very slow.

The skin becomes red along with the soft underlying tissue.

The redness of the skin becomes more and more pronounced and the part starts swelling. Slowly, one or two blisters appear on the swollen part and the skin layers above the blisters stats to become dead and peel off.

The area around the peeled off skin, becomes dead which is known as necrosis of the skin. The fat beneath this skin gets exposed.

The fat layer under the skin gets exposed under the deep dead tissue. Muscles beneath the fat layer get exposed and it is a start of the fifth stage.

Deterioration of the muscle begins and further loss of fat and skin around the infected area escalates. Bones beneath the muscle layer are exposed.

In the final stage infection reaches the bone and septic starts to set in the joints. This is a very serious condition.

Ulcers can reverse at any stage provided they get proper treatment, cleaning, dressing and medication. Chronic Ulcers is a stage where healing process has not started and over 12 weeks have passed.

Some of the symptoms for acute ulcer:

Symptoms worsen once the wound gets infected especially uncle in your calf known as venous skin ulcers. Infection can also appear at other prominent sites such as the veins. Such sites include areas around the veins of lower legs, the calf and the lower side of the ankle where the pressure of the whole body on the ankle joint is the maximum. These ulcers cause the legs to ache a lot and are swollen. There are lot of chances that these ulcers would get infected and thus, they develop unpleasant odour, increased tenderness and redness. The areas where a venous ulcer can develop will get dark red or purple, the skin becomes thick and dries up with lot of itching. People suffering from Diabetes have a higher chance of getting venous skin ulcers, as these people are at higher risk of developing diabetic neuropathy. Other uncommon sites where ulcers can develop although rare, ulcers have developed at other places such as cheeks, soft palate, the tongue, and on the inside of the lower lip. These ulcers are painful but are acute in nature and can heal in one to two weeks.